While many of you have heard of these new technologies we find it useful to explain them for everybody.  You may be surprised to find out that there are unused sources of multimedia entertainment in your home and you may also find new ways to interact with them.

DLNA – “Digital Living Network Alliance (DLNA) is a non-profit collaborative trade organization established by Sony in June 2003, that is responsible for defining interoperability guidelines to enable sharing of digital media between consumer devices such as computers, printers, cameras, cell phones, and other multimedia devices.”

“DLNA uses Universal Plug and Play (UPnP) for media management, discovery and control.[4] UPnP defines the types of device that DLNA supports (“server”, “renderer”, “controller”) and the mechanisms for accessing media over a network.”

UPnP – “Universal Plug and Play (UPnP) is a set of networking protocols that permits networked devices, such as personal computers, printers, Internet gateways, Wi-Fi access points and mobile devices to seamlessly discover each other’s presence on the network and establish functional network services for data sharing, communications, and entertainment.”

Media server – A UPnP AV media server is the UPnP-server (a ‘master’ device) that provides media library information and streams media-data (like audio/video/picture/files) to UPnP-clients on the network. It is a computer system or a similar digital appliance that stores digital media, such as photographs, movies, or music and shares these with other devices.

Now that we know how Wikipedia defines them, lets us tell you what does it mean and more important, how can we use them. Basically when these standards are implemented in our home appliances, enables them to communicate between each other via your home Wired and/or Wireless network,  play/stream multimedia content and control players from each other without actually transferring any files to the playback device.

The most common use of this technology is to enable your home computer as a media server (through native software – e.g.  Windows Media Center, or third party – e.g Cyberlink ) and stream the content to a UPnP TV ( most new smart TVs ) or to a game console ( Play station, Xbox etc).

There are already more than 9000 devices DLNA certified so it’s quite possible that you already may have one in your home. It can be a PVR such as Humax HDR-FOX T2,  a PS3, a NAS (Network Attached Storage), a NMT (Network Media Tank) Android/IOS tablet or Smartphone ! Yes, new models with 1Ghz ( or more) processors are capable to act as server, renderer or controller (although last function is most used).

Here is a link you can check if a device is DLNA certified, but many others can still work ok. 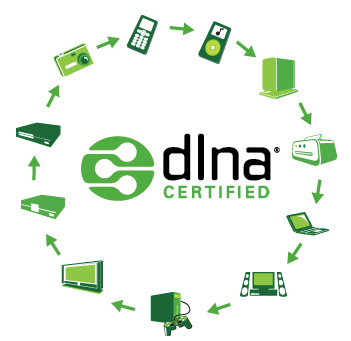 The main advantages of this setup are that it requires zero user intervention as long as you are able to connect them correctly to your home network. This way you may have you photos, videos, music available from all your devices without converting or actually coping the files! You can watch you fresh downloaded movie on your desktop upstairs right away to you TV down in the living room, controlling the playback with your phone 🙂

What is your digital multimedia home setup? How do you play movies on your HDTV?