Take a look at overnight TV ratings and you’d be forgiven for thinking Australia was a nation of newshounds. Most evenings, the TV programmes Aussies sit down to watch are the evening news updates. Some would argue that this simply reflects Australia’s outdoor lifestyle. People watch less TV here and if they do watch, it tends to be for information rather than entertainment.

In the 1960s and 1970s, Australian TV production barely existed, with the home-grown TV mainly being musical entertainment and current affairs. In fact, at its worst, 97% of all drama shows on Australian TV were made overseas, mostly in America. Since then, the TV industry has grown hugely. At its peak a few years ago, around half of screened content was made in Australia. With the growth in multi-channel TV since the launch of digital broadcasting, this has fallen and currently around a third of TV programming broadcast here is Australian-made, but that’s a good percentage compared to a decade or two ago. 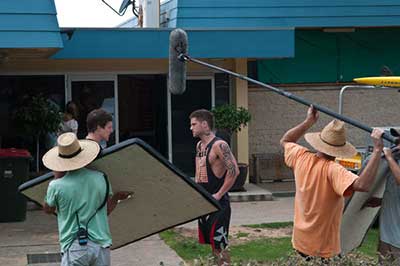 Across the world, most people’s idea of Australia and Australians comes from our TV exports. Some Aussies might roll their eyes at the ridiculous plot twists of soaps like Neighbours and Home and Away, but there’s no denying they are a TV export success story, as well as being popular at home. About to celebrate its 30th anniversary, the lives of the residents of Ramsay Street have fascinated millions and, love it or loathe it, it’s an extremely successful Australian ambassador.

An Australian ‘Sopranos’, Underbelly’s a huge ratings and export success. Reflecting ‘90s gangland life in Melbourne, the series was based on the reports of journalists who followed the drug-dealing underworld for Melbourne’s The Age. Published as Leadbelly, it follows the Carlton Crew crime syndicate.

A surprising hit, this fly-on-the-wall-style comedy series pokes fun at Australian stereotypes and, unusually for any comedy show, features an almost entirely female cast. Like Neighbours, it can claim Kylie Minogue as a star and, thanks to its success, has featured cameos from other national heroes such as Shane Warne and Barry Humphries. With its catchphrases, “Look at moy!” and “muffin tops” becoming part of everyday lingo, sun-soaked suburban life never looked so fun.

It’s hard to imagine characters more vacuous, self-absorbed and harsh than Kath and Kim, but Chris Lilley managed it with Jamie King. A critical and public success, this brilliantly observed mockumentary won international awards, including a BAFTA. Directed, written and starring Lilley, this low-budget comedy parodies teen life, the Australian education system and class divisions. A spin-off series, Jonah From Tonga, will be premiered on iview next month before airing on ABC1. Get in touch with Picture Perfect if you need help with antenna installation before it is broadcast.

About as home-grown as Australian TV gets, the thrillers based on the novels of Peter Temple are the jewel in ABC’s drama crown. Starring Guy Pearce, the former criminal lawyer turned PI and debt collector has featured in three telemovies, the last airing in April. Despite a genuinely stellar cast, the real jewel of the show is beautiful Melbourne, gorgeously shot and glimmering. Expect violence, comedy and fantastic, nuanced performances.

If you’re planning an antenna installation or upgrade, or perhaps want help setting up internet TV or a home cinema, Picture Perfect are just a phone call away on 1300 700 271.