Ever since television sets became affordable enough for most people to own more than one, family viewing of big live events has been increasingly rare. Many families now have as many TVs as there are viewers, with people choosing to watch what they desire, alone, rather than wrestling over the remote. 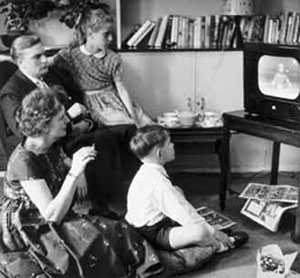 Two years ago, Yahoo!7 conducted a survey of 7,000 Australians to examine viewing habits. While 90% of respondents still stated they preferred to watch TV on traditional sets, 41% said they used social media while watching and a quarter had watched something based on a social media recommendation from a friend.

In other words, while people may not always watch TV with other people, they still share the experience of viewing. In fact, the popularity of cult TV shows often owes a great deal to social media chatter and the global reach of word-of-mouth (or key-of-keyboard) recommendation.

Younger viewers, those to whom advertising is mainly aimed, now access the internet more often than TV. These are the TV viewers of the future and, while it can be argued their habits may change as they get older, it seems that for the post-millennial generation, TV is no longer the primary form of mass communication.

Add to this the trend for time-shifted and online viewing, and increasingly people are wondering if the old days of gathering around a TV to watch key events such as the first man on the moon or the royal wedding are a thing of the past.

So, if people are watching TV less on traditional sets, or at least are more distracted while doing so, are there any events that buck the trend? There are, of course, some things that bring people together in a way that has to be experienced in the moment. The most obvious recent example is the wedding of Prince William and Kate Middleton. The wedding attracted a worldwide TV audience of 300 million, substantially less than the 2-billion predicted beforehand. In contrast, wedding of Prince Charles and Lady Diana attracted 750 million viewers back in 1981.

Royal weddings, however, do not generally feature in Australia’s most-watched TV list. Far more viewers tuned in to watch the 2005 Australian Open final and the 2003 Rugby World Cup final — just over 4 million in each case. Sport rules in the world of ratings because people want to enjoy it live, with great picture quality and on a big screen, not after the event or with pixilated images and blurry action. It’s also important to enjoy the ecstasy (or exorcise the agony) with fellow supporters.

Far from signalling the death of TV, technology could be its saviour. With the dawn of portable streaming devices and smart TV, it’s possible to create your own on-demand TV station at home. With the quality of pictures generated by a good digital antenna installation and access to internet streaming services, families can set up their dream TV schedule at the touch of a button.

Whether it’s family-friendly Doctor Who or the latest murky crime drama from at home or across the pond, bulky boxed sets and awkward scheduling clashes can be a thing of the past with the right TV set-up. If you’d like to share your viewing experience again, why not get the family together and set up a home cinema system you can all enjoy, with access to everyone’s favourite programmes whenever you want them? Call Picture Perfect today for a free home visit on 1300 700 272.

Three Worst Times for the TV To Go Blank

Why Do You Need a TV Antenna If You Have Cable?