Breaking Bad, Mad Men, The Wire; when it comes to ground-breaking TV drama, the USA has been enjoying a golden age of classic TV. Funded by huge advertising revenues and popular subscription channels such as HBO, the US TV industry has deep pockets and generations of TV-production experience. It also has the advantage of Hollywood and brilliant actors, production facilities and scriptwriters on their doorstep.

The chances are, if you’re looking at setting up a new home cinema system, keen to get access to subscription TV channels, or upgrading your antenna installation, you’ve been prompted to do so by the chance to catch the US show everyone has been talking about. Here are our current favourites, still widely available online and by subscription. 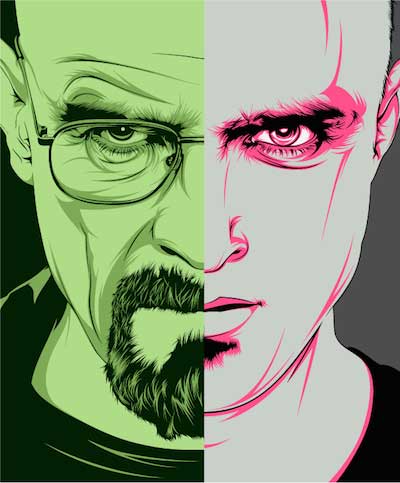 Taut, beautifully shot primarily on 35mm film and anti-heroic, Breaking Bad has broken the mould for the heroic leading man and the family drama. The boldest and most rational of motives sends mild-mannered science teacher Walter White down a very dark road into drug-dealing. Critically highly-rated (in fact, the most acclaimed series of all time according to the Guinness Book Of World Records), the show is a contemporary western and is arguably unique in creating a protagonist who becomes the antagonist. Morally questionable and desperate, Bryan Cranston’s portrayal of White manages to provoke viewers’ sympathies and their loathing in equal measure.

Period drama with an olive and a twist, Mad Men is a champagne cocktail of a show, oozing old-fashioned glamour, sex appeal and misogyny in a shiny and slickly-performed package. An ensemble class portrays the life and times of a New York advertising firm in the 1960s. Garlanded with 15 Emmys, it is particularly noted for its visual sense, period detail and design as well as fine acting and directing. Following the social change of the 1960s as it does, the show is also unusual in featuring many women in major roles, albeit through the filter of their position in the life of leading man Don Draper.

Aired by HBO in the early 2000s, The Wire arguably kick-started this golden age of US TV drama. Based on the work of author and crime reporter David Simon, the 60 episodes of Baltimore-based crime drama pulled no punches. A cult hit, the show is beloved for its snappy, realistic dialogue, unafraid to baffle its audience in pursuit of realism.

Many of the lead actors, though virtual unknowns at the time, have gone on to major stardom, including Idris Elba, although the show is also noted for including local characters in roles where their faces fit. This approach makes the show feel natural and uncontrived and, almost uniquely, accurately reflects the demographic make-up of the world it seeks to portray.

Unflinching in its portrayal of urban life in modern America, its three series aimed to show a different cog in the machine of a great city. Starting with the illegal drug trade, the show went on to look at the dock yards, local politics, education and the print media.

All three are great dramas, well worth the time needed to catch up on them, but why not tell us your favourites? Still miss your fix of Friends? Can’t wait to watch Game of Thrones? Call Picture Perfect for a free, no obligation home visit to discuss your requirements and get a quote. We operate throughout Brisbane and the Sunshine Coast, so call 1300 700 272 today.

Three Worst Times for the TV To Go Blank