Experimental TV in Brisbane first aired in 1934 but it wasn’t until spring 1956—to coincide with the Melbourne Olympics—that Australia was welcomed into the family of mass TV broadcasting. Now nearing its diamond anniversary, it’s likely that most of your Grandmas remember their first TV and their earliest viewing experiences vividly. They might even remember watching the first broadcast of an interview with the nation’s favourite grandma, Dame Edna Everage, on HSV-7’s first day of broadcasting. 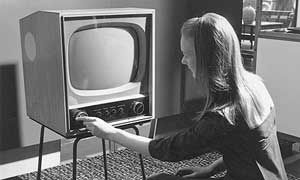 If your Grandma was an early adopter—and by the mid 1960s, 90% of Australian homes in areas that received TV had a TV set—then she would have settled down to enjoy Pick-A-Box, Bandstand or Autumn Affair on a black-and-white television set. These early programmes were effectively radio broadcasting formats broadcast live from a studio.
Much of broadcast TV in Australia in the first decade or so was imported, chiefly from the US. In fact, by the late ‘60s more than 80% of everything broadcast in Australia originated in America and in some areas, for example drama, that figure could be as high as 97%.
The cost of a standard TV set in the late 1950s was between six and ten weeks’ wages for a typical worker. Although prices rapidly fell, making TV sets more affordable, it’s no wonder that the first broadcasts were mainly viewed through shop windows or en masse with neighbours pouring into the houses of those with a TV.

A Window On the World

While any screen smaller than twenty inches would be described as compact now, most early TVs had screens of between just nine and seventeen inches. Usually encased in Bakelite or wood, these bulky early television sets were designed to be on show, a symbol of disposable income and the consumer-driven wealth of mid-twentieth century Australia.
Satellite TV was first adopted in Australia in the 1960s, well before the advent of colour TV in the mid 1970s, giving Australians better access to TV from elsewhere on the globe and helping television become the chief method of mass communication, superseding newspapers and radio. There’s a niche market in trading vintage TVs nowadays, but the clunky tuning system, bulky design and poor picture quality of vintage television sets would be baffling to a generation used to crystal-clear pictures, high definition and digital broadcasting.

In the first decades of TV, licensing and planning restrictions influenced the decision to site antennas inside buildings’ roof space. One common antenna installation problem is that these old antenna systems fail to pick up newer digital signals or get overloaded by the demands of multiple TVs accessing the same signal. In order to receive digital TV, old antennas like this will most likely need replacing with newer roof-mounted antennas, so that you can receive all the available channels.
If Grandma is leaving behind her old TV and moving into your home as she gets older, you might want to think about setting up a TV entertainment space in her granny flat. A wall-mounted flat-screen TV takes up very little room and with home cinema systems and PVRs, she can have fun setting up her viewing experience exactly as she wants it. It’s usually straightforward to add extra antenna connection points when overhauling an antenna installation.
If Grandma still wants to enjoy using that Bakelite box, then it’s still possible. With a set-top box, even very old TVs can often receive digital broadcasting, albeit in black and white. Call our team of technicians now on 1300 700 271 for a free quote and to discuss your antenna installation and TV setup needs.